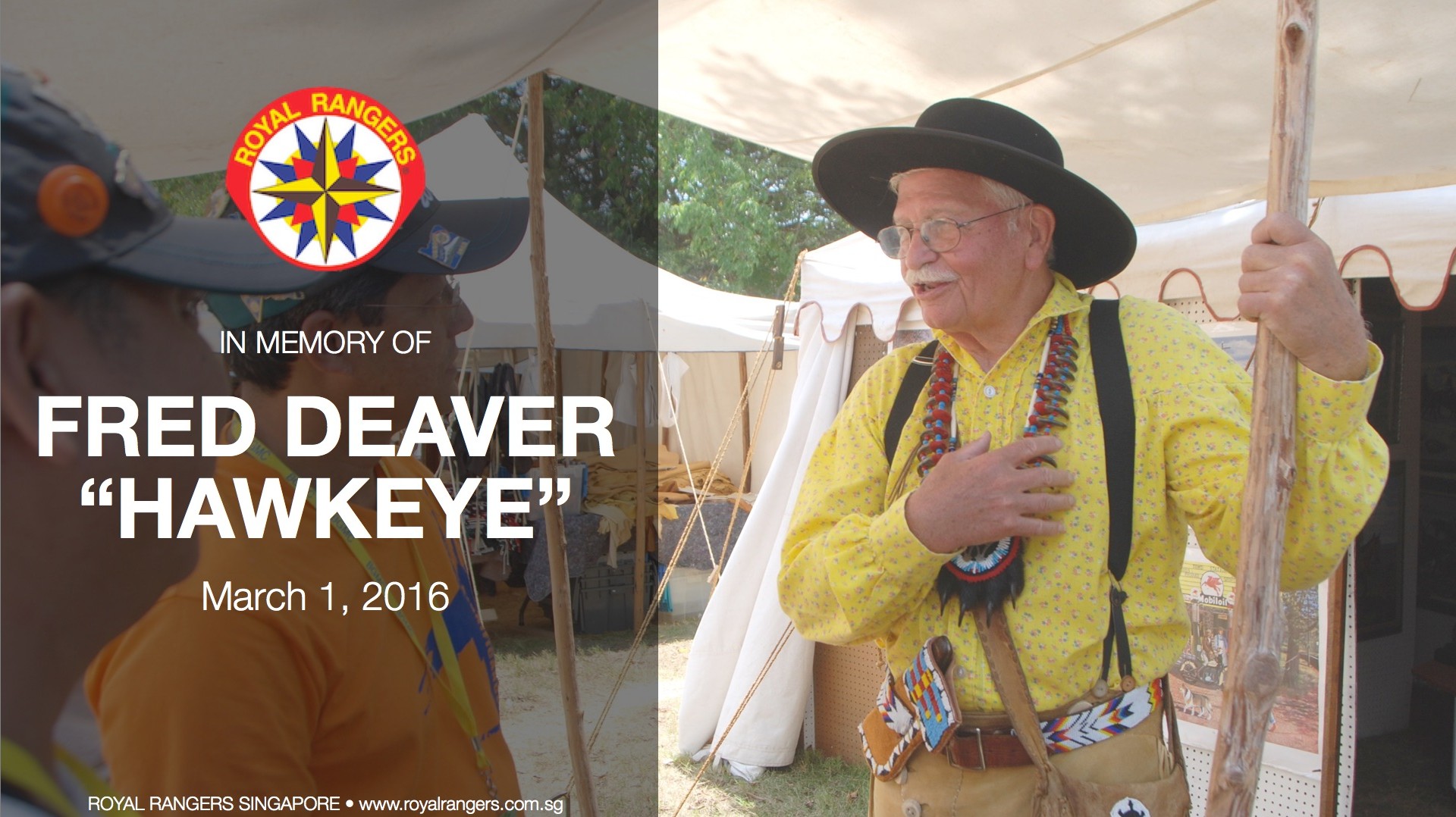 The news of the passing of Commander Fred Deaver on 1 March 2016 impacted many leaders here in Singapore, especially many of the National Staff & fellow senior leaders.

Commander Fred was one of the early commanders during the infancy of the ministry. Fred Deaver was well-known as “Mr. Senior Guide” during the training camps. He was also the US FCF president between 1974 – 2003. He was always noticeable in his FCF costume and was a gifted painter. Many of his paintings are featured on the covers of the older Royal Rangers books, manuals & High Adventure Magazines.

Fred Deaver, a nationally known western and wildlife artist, is considered to be second only to Johnnie Barnes when considering the contributions made to the Royal Rangers ministry.

Several Singaporean leaders experienced his warmth and undeniable passion for the Royal Rangers ministry while attending trainings like the National Training Camp (NTC) & Junior Leadership Training Camp (JLTC, now known as YLA) held in circa 1984 on Pulau Tekong. Other leaders also interacted with him during the Advanced National Training Camp (ANTC) & the National FCF Rendezvous held at National Royal Rangers Campsite, Eagle Rock, Missouri, USA in 1988. The last meeting with Fred was in 2012 when several Singapore RR leaders attended the 2012 US Camporama.

“A man of great stature. A man whose life impacted many, by that I mean he was able to change mindsets, beliefs, behaviours, understanding with being who he is, leading, inspiring and instructing. That made the difference in my life. Little gold nuggets that lives forever. I remember at National Training Camp he was the Senior Guide. The high standards he expects from us, working together as a patrol at Pulau Tekong, under his watchful eyes with a few words and often they were just questions or a short statement and they made us realised if we had been lazy or tardy. We were blessed by his life and stories”.

The Royal Rangers Ministry in Singapore has definitely been blessed and influenced by Fred Deaver’s obedience and faithfulness to our Master Ranger. Let’s keep his family in prayer and that his legacy will continue inspire leaders to reach greater standards in reaching, teaching & keeping boys & girls for Christ.

Read more about Fred Deaver at the US National FCF Website.