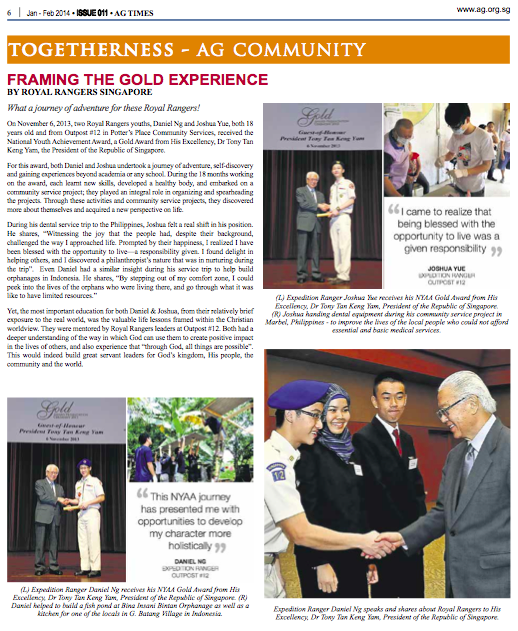 On November 6, 2013, two Royal Rangers youths, Daniel Ng and Joshua Yue, both 18 years old and from Outpost #12 in Potter’s Place Community Services, received the National Youth Achievement Award, a Gold Award from His Excellency, Dr Tony Tan Keng Yam, the President of the Republic of Singapore.

For this award, both Daniel and Joshua undertook a journey of adventure, self-discovery and gaining experiences beyond academia or any school. During the 18 months working on the award, each learnt new skills, developed a healthy body, and embarked on a community service project; they played an integral role in organizing and spearheading the projects. Through these activities and community service projects, they discovered more about themselves and acquired a new perspective on life.

During his dental service trip to the Philippines, Joshua felt a real shift in his position. He shares, “Witnessing the joy that the people had, despite their background, challenged the way I approached life. Prompted by their happiness, I realized I have been blessed with the opportunity to live—a responsibility given. I found delight in helping others, and I discovered a philanthropist’s nature that was in nurturing during the trip”. Even Daniel had a similar insight during his service trip to help build orphanages in Indonesia. He shares, “By stepping out of my comfort zone, I could peek into the lives of the orphans who were living there, and go through what it was like to have limited resources.”

Yet, the most important education for both Daniel & Joshua, from their relatively brief exposure to the real world, was the valuable life lessons framed within the Christian worldview. They were mentored by Royal Rangers leaders at Outpost #12. Both had a deeper understanding of the way in which God can use them to create positive impact in the lives of others, and also experience that “through God, all things are possible”. This would indeed build great servant leaders for God’s kingdom, His people, the community and the world.