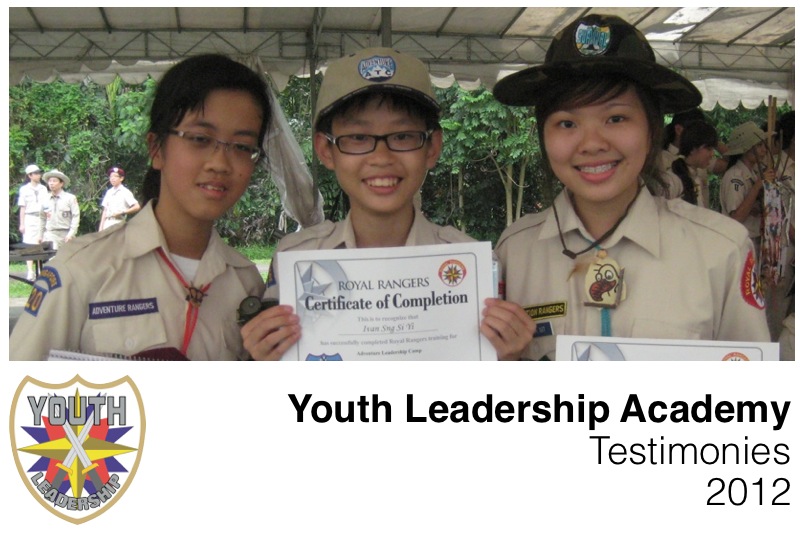 We thank God for all the YLA trainees in 2012. All the campers enjoyed their time learning new skills, working with new people and enjoying life in God’s natural creations.

Here are some testimonies & reflections;

One thing about this camp that was different to me was the nightly council fires. After them, there would be a preaching by a pastor. During these preachings, I was drawn closer to God spiritually and physically, learning how to speak in tongues. I also learnt about prophesizing, and found it very interesting and amusing to try it out, and then later find out that what I said was true! During these preachings, I really felt God’s presence with me.

At first, me and Carissa were very reluctant to go for the camp as we were placed in different camps, meaning that we would not know anyone else in the camps, although there were two other boys that signed up with our church. So, after the first day, I decided I had enough of the camp and wanted to go home, and so I speaked with commander Jason. However, he encourage me to give the camp a second chance and persevere until the end, and I really have to thank God for giving commander Jason a chance to talk to me, otherwise, I think I would have broken out of the camp earlier.

Although the camp was really tiring, especially the first day, I enjoyed it, learnt many skills like how to do tinfoil cooking, made many new friends and the most important of all, had God by my side all the way. It was nearing the end of day 1 when loneliness overwhelmed me. During council fire, as the message was ministered to us, I couldn’t help but recall the previous year, that same night, where I had company and how easily I could share my feelings about the message with Rachel, my friend who was with me. The time for prayer and acceptance came sooner than I expected while I was still deep in thought and again, as I remembered both of us standing by for each other when this exact event happened, I could not take it anymore. I broke down and told the camp commanders that I wanted to go home because I felt very homesick. I called my parents and told them that I wanted to leave camp. However, as it was already very late, they could not come to pick me but I insisted that the next day would not go well for me. My camp commanders tried hard to console me but I had no heart to listen. I just kept to a corner wherever they dragged me and did not care about my surroundings. I wouldn’t budge when they tried to bring me to the campsite. Just when I thought that this episode would not end, God heard my cries and sent Janessa over to talk to me. I was so relieved that there was someone whom I knew would finally understand me and simply told her the whole story. She gave me some advice and told me to stay strong because she also felt the same way as I did with no one to be close to, but it was going to be how I chose to handle the situation that would make the difference. She prayed for me and we bid goodbye before going separate ways. ASC 2012 was a camp in which the theme of “Trusting God” really held true for me.

I was very apprehensive about attending this camp as this would be the first YLA camp I would attend alone without my buddy Gracia who had been attending previous camps with me. Also, I heard from others that Advanced Survival Camp would be a really tough camp. There were no tents for you to sleep in, not much food, and no bathing allowed. It  was really “survival”, where we were only allowed to bring only one shoebag of bare necessities to a “mystery island” that we would be staying on for 3 days and 2 nights. But all these contributed to a once in a lifetime experience that was extremely memorable.

There are two main things that I would like to thank God for in this camp. First was the issue of being lonely. As I mentioned earlier I was the only one from outpost 20 that was attending the ASC and I was really nervous. I always had Gracia to back me up in previous times. However, this time, I really wanted to attend ASC because I knew it would be fun and also it was the last camp I would be able to attend YLA for as a trainee because I’ll be turning 18 this year, the oldest age in YLA. So I cast aside all my fears and instead prayed over the camp and prayed for a good survival buddy. I already had a person in mind and I told God in faith that the girl I was praying for to be my partner would really be my partner. Naturally, God is a good God and He always pours out blessings on those who choose to obey Him. On the first day, when my patrol advisor Commander Sylvia told me that my partner would be Joylynn from outpost 1 I was really happy because she was the very person I prayed for as my partner.

Another thing that helped me overcome all my initial doubt and fears was the small number of girls. There were 23 campers in total for ASC, out of which only 4 were girls. Because of this small number of girls, we easily connected and made friends, so within the first few hours of camp, I’d already made friends with Joylynn and Lydia from outpost 1 and Sarah from outpost 12. We were all placed in the same patrol, the “Valiant Vultures”, another plus point for me.

The second main thing God helped me overcome was my unwillingness to submit all areas of my life to Him. I’m the kind of person that likes to be in control of all the different areas of my life. I hate it when things don’t go my way or when something unexpected happens that throws my life off-balance. One main issue I struggle with is the inability to submit my friendships and relationships to God. I always dictate how the relationships I have with other people should be like and I never put God in the centre of these relationships. However all that changed through ASC. On the first day, our camp commander Commander Mark told us that we should write down expectations for how we want God to move us  in this camp. One of my expectations was for God to teach me total surrender and submission. I didn’t expect how God would teach me this, but He did so in an interesting way. For those who know me, you would know that I’m pretty addicted to social media and texting my friends. So every so often I’ll be typing away at something on my iphone or snapping a photo here and there. In fact on the first day of camp before I left for the island I was using my phone quite a lot, without even realising it. But of course, in a survival camp, a phone is the last thing you can bring with you. Thus I left my phone zipped up in my bag at the campsite when we left for the mysterious island and didn’t even think of bringing it along. Surprisingly enough, that was how God taught me to surrender and submit to him. My excessive use of social media and texting my friends actually was drawing me away from God. I liked to constantly be updated on what all my friends were doing and always looked at their Facebook profiles or read their twitter feeds. But in ASC, I was completely unable to do that. It made me feel uncomfortable having a lack of access and communication to  my friends and this in turn, made me feel a lack of control over my relationships. Eventually, I realised that this was God’s way of having me focus on Him and Him alone throughout the entire camp. It was amazing how God taught me to submit to Him.

I can honestly say that ASC 2012 has been the BEST camp that I’ve ever attended in all my 17 and a half years of life. All the tough moments like when we had to kill a huge bull frog or sit for hours in the sun holding a magnifying glass trying to start a fire ended up being the best moments of the camp. Also, sleeping in a shelter of leaves and staring up at the perfectly clear night skies dotted with numerous stars was an experience like no other. Oh, did I mention the PERFECT weather throughout all our time on the island? Yet another thing to praise God for!

Through this camp, I’ve really learnt that God is sovereign over all things.

To all the ARs and ERs that have never attended a training camp. I strongly urge you to. It’s the best experience, and you will forge friendships with people from other churches that last a lifetime. Not to mention, you’ll encounter God in a way that you never have before.