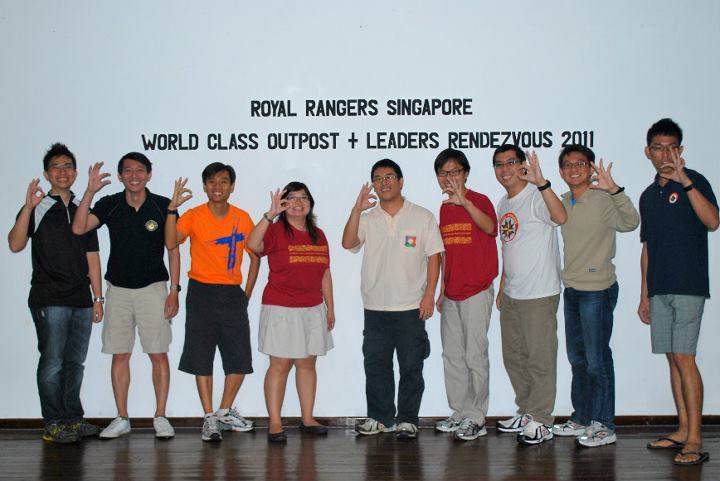 At the recent Leaders’ Rendezvous held on 7-10 September 2011, Royal Ranger leaders had the opportunity to attend the World Class Outpost (WCO) Seminar which aims to empower leaders to be effective and efficient members fo the Royal Rangers Mentoring Ministry to Youths. One leader, Commander Mark Sng from Outpost #11 shares his thoughts; [blockquote]I didn’t manage to compose my thoughts to go out to give a testimony during WCO (RR Leader’s World Class Outpost retreat 7-10 sept). Well, I attribute it the cold room and sleepiness which made my brain slowdown and unable to process my thoughts for testimony time.

WCO gave me the personal encounter I needed as I came expecting God to speak specifically to me. Instead of addressing me with the message I wanted specifically, in the first night’s campfire message, I was challenged to move beyond where I am because God would want us to look beyond what I see and be in an area of greater influence. The message was very unexpected, but it gave a high level strategic challenge that I couldn’t ignore.

Patiently, I waited for my message from God to come on the second night. The sharing was a strong message for us to never quit because we are doing a good work and problems will always come our way and so we need to always pray and pray and pray. I thought I would be having a time for me to enjoy being ministered to (since I wasn’t a committee member and could enjoy the entire WCO as a ordinary participant). Instead, I was tasked to go forward to pray for others! In the empty and hollowed condition I was on, I learnt to pray earnestly and bless who was before me. The more I prayed, with the little in me, the more I was able to pray through the Holy Spirit because there was so little in me to fuel my own human wisdom. When I retired that night, I felt even more refreshed than I had felt in a long time because somehow God had met me at His own terms.

The moment I enjoyed much in WCO was when I look around and I saw God’s handiwork woven through 15 years of my life. The older leaders from #22 were over 50 years old comdrs who had labelled themselves as 武林高手 because they were no longer youthful or enjoyed a great burst of energy. Rather they declared themselves as aged, much like the old sages in those sword fighting movies. As such, they desired to have young leaders take over the ministry from them as they felt unsuitable to lead the teens and youths. In the midst of them is a Comdr, Johnny Koh, whom I first met in 1996 in my first camporama.

As a young Comdr who hated the uniform and really could not make much sense of all the camping stuff, staying in a rugged serimbun campsite, my first camporama was something I wasn’t really looking forward to, especially when you threw in the uniform and all the mumbo jumbo RR lingo. Johnny was an experienced RR comdr and I was sharing the same room with him together with my fellow comdrs. I don’t remember much about what we talked about, but somehow, his encouragement allowed me to ease through the camporama without feeling too out of place.

Sometime later, I found out that Johnny had met with a personal accident and we were asked to pray for his condition. I only knew he recovered but eventually he was no longer in Rangers. How amazing it is for me to one day bump into him during a RR leader’s training module because the church he now attends has started RR and somehow, he’s now back in the ministry. Now he’s here with me in WCO! Even though his outpost is new and label themselves as noobs with white hair/oldies akin to 武林高手, I’m sure Johnny never realised that the very reason why my outpost now have young RR comdrs is how God had woven his involvement into my life as a young RR comdr. The very fact that I’ve stayed 18 years in the ministry and seen my kids grow into adults is because time and again, God wove older leaders and their passion into my perspectives. Johnny made enough impact into my life when I was a 21 year old unwilling leader and 15 years later, I’m still here because the meeting with him in 1996 was one of the many chance meetings with folks whom God had brought along in my life to continue to stay focused.

Much as the older 武林高手comdrs look towards young leaders, I’ve always admired these 武林高手who serve without young leaders because I pray too that I will continue to faithfully serve when my body is old and energy low, because you can never be too aged to Evangelise, Equip and Empower the next generation for Jesus Christ.

As I once learnt from Comdr Wing Leong, “may all who come behind us find us faithful.”