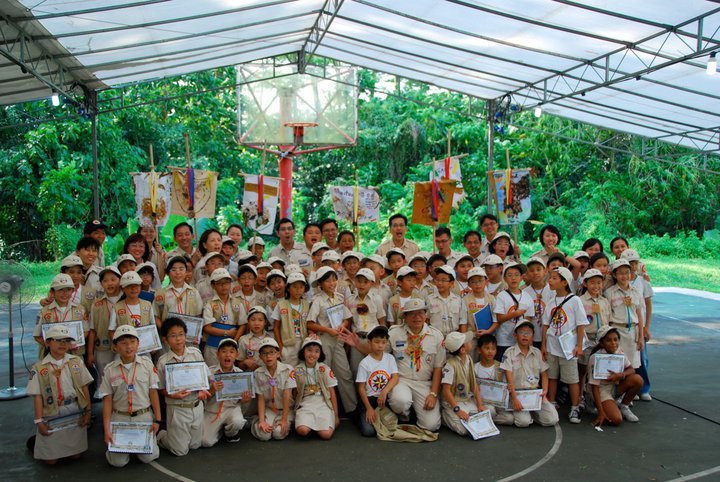 A testimony by a Discovery Training Camp Participant, Hannah Kwok of Outpost #20;

[blockquote]I participated in the Discovery Training Camp (DTC) in the year 2011 and have benefited much from it. I have learned responsibility, leadership, time-management and many others from the activities there, and I think it has been a very enriching experience for me.

I have learnt to be responsible through many things; like being punctual for all the activities and to make our patrol’s flag and bolo tie. We had to use our creativity to create our group yell and song. (Okay, I’ll admit that I thought Bobcat’s yells and songs were very decent, so were the United Bear’s.) I was the assistant patrol guide of Hawk patrol for the first day, which helped me to learn to be a better leader.

We played different games which taught us teamwork and the importance of it. The games were very fun and engaging, especially the water bomb!

There were lessons to be learned there, too. Like Punctuality, Council of Achievement, and many others. They were well taught by the commanders in charge on that topic.

What touched me the most was the story of the Team Hoyt told during the Campfire service about a father who fathered a son who was disabled in a way that he could not walk or speak. The doctors told him that his son would be nothing but a vegetable, so put him down, but his father, Dick, brought Rick (his son) home and raised him like a normal child, and when Rick was 12 he finally found his voice through a machine. Then he told his dad that he wanted to take part in a charity race. In the end, Dick, who was not a runner, participated in 900 different types races like charity races and ironman races (the ultimate test of endurance) and triathlons, pushing and pulling his son on boats through water and wheelchairs on land. So Rick achieved his seemingly impossible dream, with the help of his father, Dick and God. After the video, it got me wondering: ‘’If a human dad like Dick would do such a thing just for his son, than how great would God’s love be?’’ Most of us prayed to receive Christ after that. The commanders prayed for us too.

This has truly been a good physical and spiritual experience for me and I have benefited much from it. I hope to attend more of such camps in the future.
[/blockquote]